It is with great sadness that we have heard about the death of Rita Crosby. Rita was the group treasurer for many years, helping Ron, and ensuring the group stayed on a sound financial footing! Our thoughts are with the family.

The local group has been running regular beach cleans and litter surveys at Half Moon Bay for over ten years, but recently we have decided to take a wider view, and run some ‘guerilla’ beach cleans, to compare beaches more widely around the area, and see if there are areas that might benefit more from a regular clean.

Last night (July 21st) many of us took advantage of the good weather to cycle to the Venus and Child statue on Morecambe prom (clost to the golf course), to take a look at the beach there. The shore is composed of a steep bank of cobbles and shingle, the lower reaches of which provides a footing for common seaweeds like Ulva (sea lettuce) and Fucus, going to flat sand and mud further from the shore, with patches of Spartina or cord grass.

The beach clean focussed on the shingle slope, around the high water mark, where litter is most likely to be left as the tide goes out. Over a one hundred meter section we collected 1kg of litter – which is really pretty good, and indicates that this stretch of the coast (from Half Moon Bay to the Golf Course) is in good shape – at least as far as litter is concerned!

It is with great sadness that we’ve learned of the death of Maura Mitchell earlier this week. Maura was an MCS member since its inception, and a great friend and supporter of Lancashire MCS. She became known nationally for her friendship with Donald the wild dolphin which had adopted the waters of the Isle of Man filmed by Yorkshire Television and subject of the book ‘Follow a Wild Dolphin’. She co-wrote the guide book ‘Dive Isle of Man’ and had exceptional knowledge and experience of its dive sites and marine life. She will always be remembered for this, and her kindness and support.

As a distraction from Coronavirus, I would like to present The Open Sea: The World of Plankton by (Sir) Alister Hardy. I recall borrowing a copy from my local library a great number of years ago, perhaps 15 years after its first publication (I believe) in 1958… It was one of the books that got me interested in Marine Biology (with some help from the televised under-sea explorations of a certain Jaques Coustea). Hardy provides a fascinating account of the search for, and study of, some of the weird and wonderful creatures that float about in the seas about us. The ingeneuous (commonly hand built) equipment to catch and keep these creatures alive, state of the art in the early 60’s is still the go-to for the amateur plankton hunter. Back then the black and white line drawings and occasional colour plate hinted at a world that was alien and exciting in my imagination…

Revisiting the publication now as a Kindle Edition (re-published in the Collins ‘New Naturalist’ series), I find it every bit as fascinating and informative; while I am now familiar with many of the coastal species described, there have been a few where the desciption has triggered a light bulb moment of ‘that was what I was looking at!’. I fear I must blame this book in a large part for my habit of keeping a small plankton net in my dive suit pocket, to deploy on long surface swims back to the van after a dive. A good dive keeps on giving with an interesting or novel capture to be discovered later under the microscope!

You can get the Kindle version without fear of infection from Amazon (about £10), or collect an (older or original!) edition second hand from ABE Books (they will deliver!).

After a year’s absence, it was good to be able to attend the Kite Festival at Morecambe again this year. Our ‘new’ gazebo had its first outing – and proved to be very successful, bringing us a bit closer to the people moving along the prom viewing the kites!

There was quite a lot of interest in our stand, and we are greteful to everyone who came to chat to us, as well as a number of donations. The local area group made £26.80 from donations, and sales of pin badges raised £42 for National MCS.

Saturday, coincided with Armed Forces Day, so we were treated to a Dakota fly over and parachutists! Sunday was more difficult, with high winds causing us to close down a little early for fear of loosing our gazebo!

While the amounts of money raised are small, as long as we can break even, events like these allow us to ‘spread the word’ about quite how special the marine life around the UK is, and how much it deserves our protection. On this score, it was great to see how many younger visitors were interested in our marine life, and clued up as to some of the threats it faces…

It is my sad duty to report that Betty Green has died. Betty and her husband Gil were great supporters of the group since its inception, and keen divers into their seventies! Betty’s love for, and understanding of, marine life was outstanding, and a great inspiration to all of us blessed to have known her.

I know that many of us hold fond memories of her, diving, or on shore walks. The photograph (by Chrissy Ryan) is on one of our trips to Lochaline. She will be missed..

Loch Sunart and the Isle of Gigha

A big thanks to everyone who came along to our meeting, ‘Loch Sunart and the Isle of Gigha’ on the 14th November, which looked at the life in two very different post-glacial marine-scapes. Gordon did an excellent job exploring some of the fascinating life in Loch Sunart, which included flame shells (photo. above by Gordon Fletcher) and hard corals.

The life around Gigha might be described as prosaic – almost terrestrial in that is is dominated by large marine plants (though this is unusual for a marine ecosystem!). It did, however, open up a brief discussion about invasive species, led by observations of wireweed (Sargassum muticum) and Codium (tomentosum/fragilis). The problem with introduced species is that they are extremely difficult to remove once established, and the process of removal may be damaging to many other species in the area. For Codium, studies suggest that our native species are not being overwhelmed. Wireweed is hard to ignore, being a large spreading kelp species, but is also being colonised by local wildlife; so while it clearly competes with native species, it also presents opportunities for local wildlife. The final picture, I felt, was of quite a healthy mix of marine plant and animal species around the island.

You can read a more scientifically literate argument for considering invasives as a potentially valuable part of the ecological mix by Martin Schlaepfer in PLOS Biology – see ‘On the important of monitoring and valuing all forms of biodiversity‘.

Sorry, Marine Life in Morecambe Bay has had to be cancelled due to a double booking.

We are very pleased to report that Betty Green, a long time supporter of the group, has been awarded the The Wildlife Trusts’ Marsh Volunteer Award in recognition of her outstanding and demonstrable contributions to marine conservation. I cannot think of a person more deserving of this award!
Further details: Volunteer marine conservationist wins prestigious award 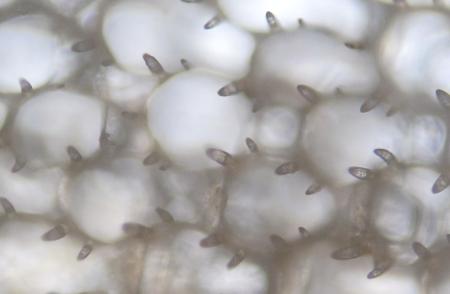 The Bay is home to a vast army of locals, who have survived and adapted to a landscape that appears at first glance to be empty… At our talks on the 10th February we investigated the most overlooked creatures of the Bay. The couch-potatoes. These are animals that, having found a place suitable to put down roots, have stopped there for the rest of their lives. They rely on the tides of the Bay to bring food to their waiting mouths.

The ecosystem of the Bay is driven by phytoplankton blooms, which are at their most extensive in Spring and Autumn. For the rest of the year plant life is comparatively scarce. In this environment our ‘couch potatoes’ play a vital role; every bacterium, every gram of poop, anything that can be recycled is brought back into the food chain. Despite their sedentary nature, these filter feeders are an essential part of life in the Bay.

This intensive re-use of all things organic has, unfortunately, an unexpected side effect. Organic toxins, such as PCBs (banned in the seventies) are held within the marine food web, and are responsible even today for the deaths of top marine predators, such as dolphins and killer whales (See for example: BBC report by Rebecca Morelle).

This sobering fact leads us some way towards our last talk of the Winter series in the Gregson – ‘Human Impact on the Bay’ on Wednesday 9th March. At this meeting we will look at a couple of the ways we impact the life of the Bay, through Fisheries and litter.